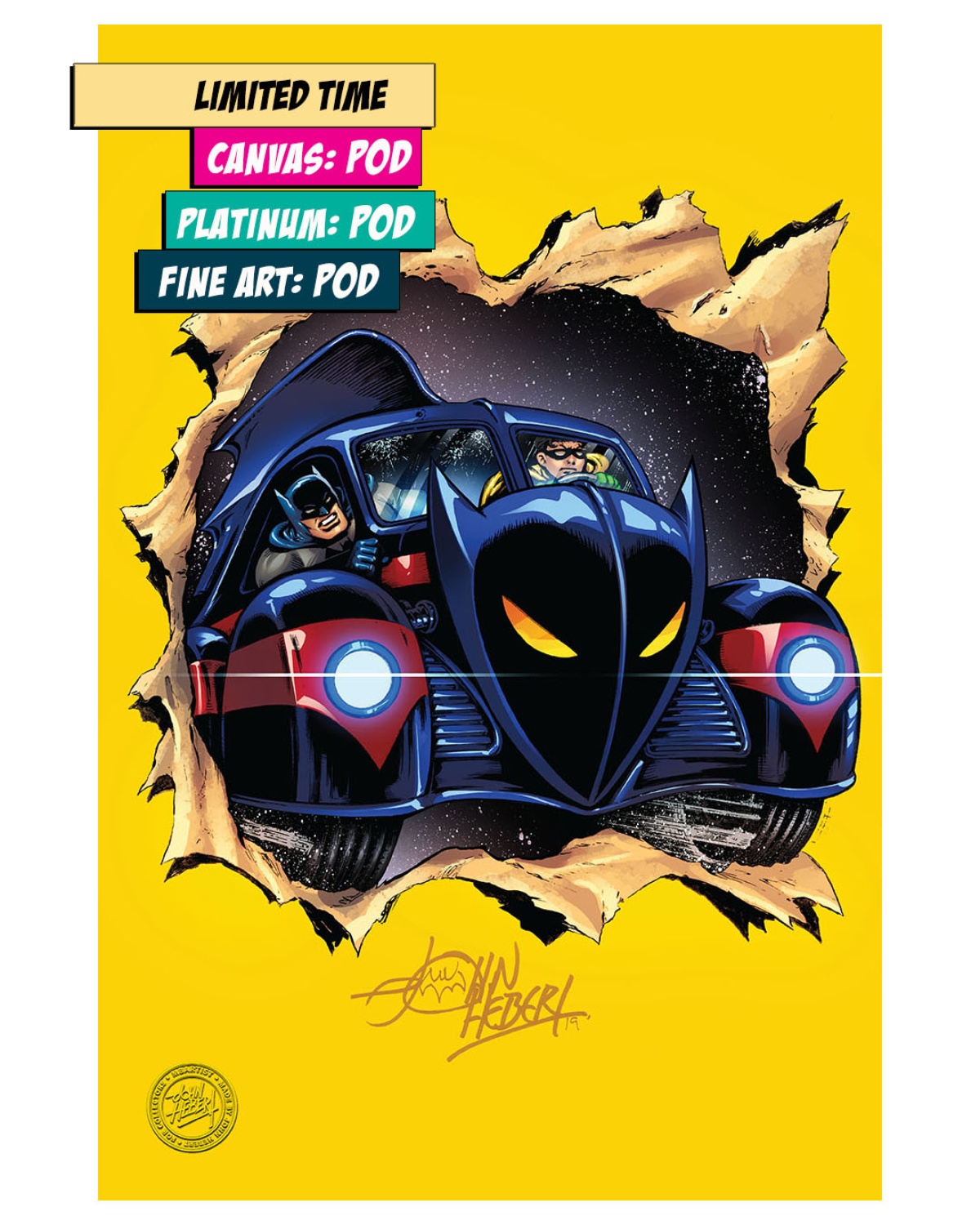 About BATMAN: ENTER THE BATMOBILE From the archive of Marvel artist John Hebert, a Batman/Batmobile poster inspired by a cover creation by Golden Age artist Dick Sprang.

“I had been looking for something to do with this image for a while, being a car guy and a big fan of Batman. The original was a bit shaky, especially for a Dick Sprang (Golden Age artist). The draftsmanship was a little shaky and the car was leaning a bit. Maybe a little rushed. I have a model of that very car in my studio so I was able to use it and manipulate it to get the angles down. I worked to stay true to the original but with my style and once it was colored, Wow! Did it just Pop!” - John Hebert

A character of DC Comics, the “Batmobile” is the fictional supercar driven by the hero Batman. Kept hidden away in the “Bat Cave,” the Batmobile is both a heavily armored tactical assault vehicle and a personalized custom-built pursuit and capture vehicle that is used by Batman in his fight against crime.

The Batmobile first appeared in Detective Comics #27 (1939), where it was depicted as an ordinary-looking red car. In Batman #5 (1941), it had a bat hood ornament and a darker exterior color similar to the image featured in artist Dick Sprang’s artwork. Sprang is best remembered for his Batman work during the Golden Age of Comic Books. Sprang was responsible for the 1950 redesign of the Batmobile.

About the Creator, John Hebert

John Hebert, born in New York State in 1965 is a Marvel alumnus whose earliest canvas was the walls of his family home. At age four, he sketched his vision for how TV’s Batman and Robin (Adam West and Burt Ward) would escape from The Penguin (Burgess Meredith). At the insistence of his mother, John’s media transitioned to pencil and paper where his talents accelerated, accepting a job to draw his first comic book just 2 days before his graduation from art school... John’s most recognized work includes the Punisher: War Zone, X-Men Adventures, Deathlok, Captain America, Spider-Man, Sable, and Jonny Quest.